Why the slow, mindful craft of pottery is booming worldwide — from BBC.com

HomeNewsWhy the slow, mindful craft of pottery is... 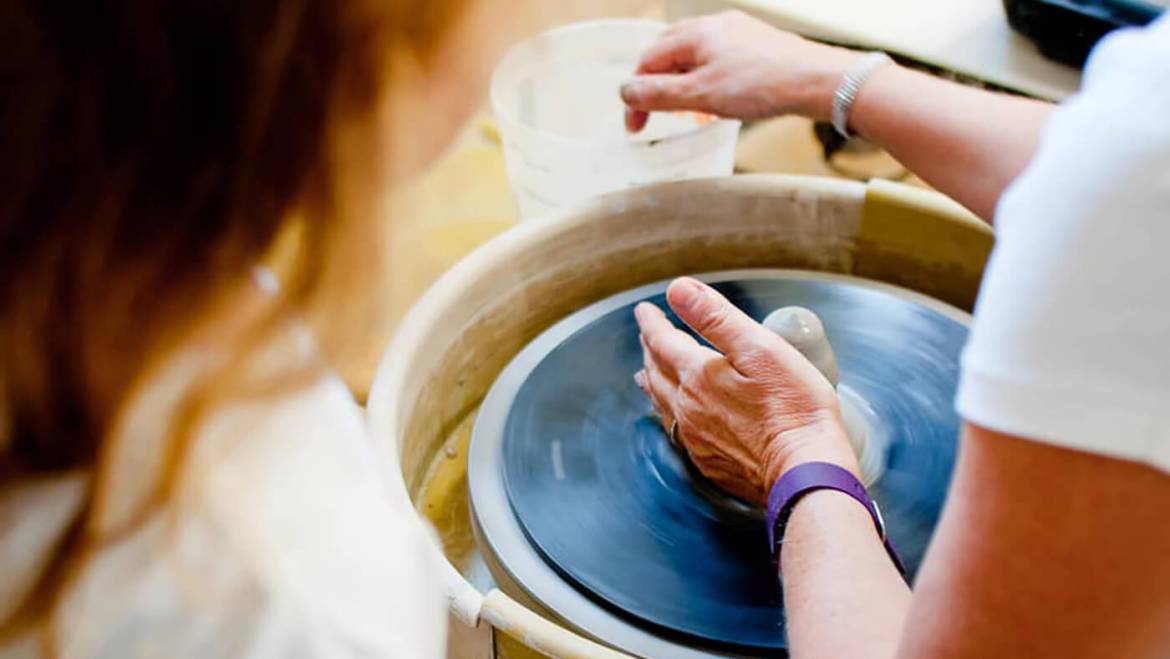 Pottery is the perfect tactile pastime for now, say its fans, and a great antidote to the digital world. Dominic Lutyens talks to enthusiasts and professionals about their love of clay – and the power of touch.

The tyranny of working and communicating digitally is one reason for the recent appetite for crafting – it is the perfect antidote to the online world. And of all the crafts, perhaps pottery does this most successfully. The messiness of working with wet or damp clay and the need to follow a process to achieve results forces practitioners to put their phones and tablets aside. What’s more, although multi-tasking has long been seen in a positive light, now is a time when many of us yearn to slow down, and focus on a single, absorbing activity.

Amateur pottery buffs all over the world are increasingly attending classes or open studios where they can choose to make pottery for one-off sessions or take out longer memberships. In the UK, the popularity of open-access studios is a nationwide phenomenon. Such spaces include Turning Earth in Leyton and Hoxton, London, the Clay Room in Leicester and Clay College in Stoke-on-Trent. In Spain, which has a rich tradition of ceramics that encompasses the work of Picasso and Gaudí, pottery is popular in Malaga, Madrid and Barcelona, while in Hungary, there is the International Ceramics Studio in Kecskemét. In Brooklyn, New York City, there is Bklyn Clay, a pottery studio founded in 2018.

Ceramics are a highly versatile medium, allowing makers to learn myriad techniques, including hand-sculpted pots, slab pots (created by joining pieces of flattened clay) and pots made by pinching or coiling clay or using plaster press moulds. “Clay acts almost as an antidote to the overwhelm of the digital world,” says Jennifer Waverek, owner of Bklyn Clay. “It interrupts your compulsive email-checking. Your mind has a single focus, so the practice can feel meditative or therapeutic. There is no way to speed up clay-drying or firing, there’s no ‘clay-microwave’ – ceramics take as much time to make today as they did 2,000 years ago.”

I love taking clay and patiently producing a useful, beautiful object with it – Tony Shepherd

However, there is a major irony to the crafting trend: social media is fuelling it. It has hooked a younger generation’s interest in pottery in particular. Young amateur potters showcase their work on social media, and the interest in it can be gauged by the huge number of likes on their Instagram pages. “Social media has played a crucial role in bringing craftsmanship to a new audience,” says Pablo Fernández-Canivell, a self-taught ceramicist based in Malaga, Spain. He began making pottery in 2017 on the recommendation of a therapist, who suggested it as a form of stress relief as he was experiencing severe anxiety. “Instagram is full of hypnotic videos of people making ceramics by hand, and millennials, many of whom had never been near a real pottery wheel before, find the process of hand-making ceramics very appealing.”
Handling clay and following the slow process of making can be meditative and calming for practitioners (Credit: Turning Earth, London)

Handling clay and following the slow process of making can be meditative and calming for practitioners (Credit: Turning Earth, London)

There is also a correlation between the popularity of ceramics and cooking, often pictured together on social media. “On Instagram, ceramics are frequently photographed with food on them,” says Toby Brundin, who runs the annual ceramics fair Ceramic Art London. “This is driving younger makers to create domestic tableware.”

Tallie Maughan, co-founder of Turning Earth, believes many are attracted to making pottery because of the satisfaction they derive from ending up with practical pieces: “Careers that come with seeing the end result of your work are becoming rare. Working with clay allows people to create something satisfyingly functional. Within a year, you can even populate your kitchen with usable, self-made crockery.”

Established potter Sue Paraskeva, who is based on the Isle of Wight in the UK, finds it rewarding knowing that others use her internationally successful line of tableware. “It’s great that people are enjoying using my work every day,” she says. “It enhances the mundane activity of eating.”

The clichéd image of pottery classes peopled by the middle-aged no longer holds true. Ceramic Art London, normally held at art college Central Saint Martins, is popular with young collectors with its wares priced from around £30 ($41.55).
Ceramicist Sue Paraskeva has exhibited her work, and sells internationally (Credit: Saatchi Gallery)

And pottery’s formerly fuddy-duddy reputation has also been shaken up by a perception in recent years of the craft as experimental, exemplified by the work of Grayson Perry and Edmund de Waal. “When I was studying ceramics at the Royal College of Art from 2009 to 2011, no-one called themselves a craftsman or potter,” remembers potter Stuart Carey, who co-founded The Kiln Rooms studios in south London in 2015. “Now you have events like London Craft Week and craft-related TV shows with a strong educational appeal.” According to Brundin, “Lockdowns have spurred on the revival of crafts, with people able to appreciate images and videos of them on social media.”

The success of TV show The Great Pottery Throw Down – which sees amateur potters compete to make the best ceramics – has also stoked an appreciation of pottery. “The reason for such an avid interest in pottery is because the material lends itself to a personal experience that the potter takes on throughout the series,” says Keith Brymer Jones, a judge for the UK series and an established potter. “It’s a perfect medium to convey one’s imagination and encompasses sensual, textural and cognitive activities.”

Tony Shepherd, a member of Turning Earth, explains why he got involved in pottery: “I never went to art school. As a boy, I was pushed down the technical route. One day, my wife and I watched The Great Pottery Throw Down and found it unbelievably inspirational. I love taking clay and patiently producing a useful, beautiful object with it.”

“The programme responded to an existing trend,” says Brundin, who is also business manager at The Craft Potters Association (CPA). Established in 1958 as a small friendly society, CPA promotes British studio potters and ceramicists, and now has 1,800 members (compared with 1,000 a year ago). It provides members with practical, topical help, such as how to make and sell pottery during lockdowns. CPA’s founding members included pioneering potters Eileen Lewenstein and Rosemary Wren.

Another influential 20th-Century ceramicist, the Stoke-born Clarice Cliff – famous for her affordable ceramics, including her iconic, colourful, Art Deco Bizarre range of 1927 – was one of the first women to produce a line of crockery under her own name. Her work is highly collectable, and she is the subject of upcoming film biopic The Colour Room, starring Phoebe Dynevor as Cliff.
The annual fair Ceramic Art London is increasingly popular with young collectors (Credit: Yuta Segawa/ Ceramic Art London)

In recent years, ceramics has become more gender-neutral. “Women were more interested in pottery classes in the past but that’s changing,” says Fernández-Canivell. “Women in Spain were traditionally tasked with ‘domestic’ skills, such as making clothes or ceramics. But the sight of men doing ceramics as a hobby on social media has helped to challenge stereotypes. Spanish men have increasingly embraced feminism, and are experiencing creative ‘feminine’ hobbies, such as pottery or knitting. When I began attending private pottery studios in 2018, most attendees were women in their 50s and 60s. Now 70% are millennials with an equal gender balance.”

“One reason for the interest in pottery among men is knowing that celebrities Brad Pitt and Leonardo DiCaprio are keen potters, while actor and director Seth Rogen has his own line of expressive pottery,” says Brundin. Rogen makes bulbous, ultra-pop vases in searing shades that depart from the muddy beiges many associate with ceramics. And with Brymer Jones known for crying freely on The Great Pottery Throw Down, pottery is seen by some as an acceptable outlet for men to express their emotions.

Pottery requires its practitioners to set aside time to follow a procedure and predetermined techniques, which in turn makes for a slow, soothing experience. “If you don’t follow the process, there is the possibility of failure,” says Carey, “Unlike with digital technology, you can’t take a step back or undo what you’ve done.” Pottery is grounding as it makes you humble,” says Paraskeva. “Every time you get too confident, things go wrong.” She deliberately deploys techniques that discourage complacency and result in unpredictable, organic effects: “I use a wood-firing kiln. When the wood turns to ash, this coats the pots with a natural glaze which melts on them at a very high temperature. The way the flames hit the pots determines the patterns on the glaze. I enjoy not exerting total control over the process.”
Bklyn Clay is an open studio in New York where various pottery techniques can be learnt (Credit: Frank Oudeman)

Bklyn Clay is an open studio in New York where various pottery techniques can be learnt (Credit: Frank Oudeman)

According to Brundin, people generally approach pottery in one of two ways: “Some just love the feel of clay; they relish its visceral quality and want to go with the flow. Others want to know exactly what to do with it. A lot of people want to throw on the wheel as they see this as the pinnacle of ceramics – a skill to master.”

Experienced potters talk of entering a calming, trance-like state when making their pots

“There are no shortcuts to making a successful vessel,” he adds. “Clay is fragile and breakable when fired. To begin with, you have to prepare the clay by wedging it.” This is done by slamming the clay against a table or workbench to get rid of its air bubbles, otherwise it explodes in the kiln. “This can take up to 20 minutes to do well.”

However, experienced potters also talk of entering a calming, trance-like state when making their pots. “There are moments when I completely switch off, such as when I’m throwing a batch of identical bowls I’ve made thousands of times,” says Florian Gadsby, who works from his studio in London, and is an Instagram sensation with around 460,000 followers. “I zone out and listen to music and podcasts and let my hands do the work without thinking what they’re doing.”

Other sectors are investigating the beneficial qualities of clay. The Clayground Collective is a not-for-profit organisation that was set up in 2006 in response to a decline in clay being used in art departments in schools and the closure of ceramics courses in higher education in the UK. In 2014, it held a symposium called Thinking Hands, which “explored the role of hand skills’ development in seeing, thinking and learning, drawing on perspectives in ceramic design, medicine and neuroscience”. This also examined whether 3D-printing ceramics is threatening to eclipse haptic skills (skills relating to the sense of touch), paralleled by the rise of robotics used in surgery.
The professional potter Florian Gadsby first gained a following through social media (Credit: Florian Gadsby)

In these challenging times, it’s perhaps no surprise that pottery is booming – after all, it’s not only a way to slow down and be calm, but also offers a way to be mindful, through the patience required. “Mindfulness is about being present in the moment, and the same goes with ceramics,” says Duncan Hooson, a ceramic artist and associate lecturer in ceramic design at Central Saint Martins. “You have to focus on the now because of the interaction you have with the material, which is so malleable and immediate.” Hooson, who has taught ceramics for three decades, has also observed that the current enthusiasm for pottery is generational: “Young people have engaged long enough with digital technology. They want to know now how to make things, which they find immensely satisfying”